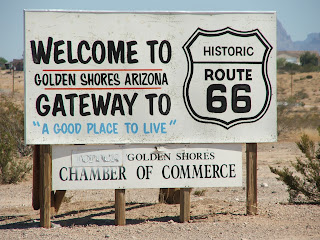 We woke up this morning at the non-deadly Motel 6 in Lake Havasu. Thomas gets his early morning walk on and then we get the hell out of Dodge. Our final destination for this evening is Seligman about a two hour drive along I-40. However, today we are actually traveling on Route 66 so we circle back from Lake Havasu City on the I-40 headed east to Exit 1, Topock. Here, Route 66 begins a five-hour drive through towns long forgotten by the masses traveling the interstate. If you’ve seen the movie Cars you know what we mean. The drive begins through some shady green trees giving way to the town of Golden Shores which provides some good photo ops if nothing else. Continuing along, Thomas notes that now he knows what being in the middle of nowhere really means. There aren’t many cars on the road, make that barely any, and the few we do see are traveling the opposite direction! Judging from the out of state license plates, they are probably Route 66’ers coming from Chicago heading to Santa Monica.

Oatman is an authentic western “ghost town” although there are plenty of merchants hocking their wares to eager tourists, hey that’s us. The town is famous for two things: one, the Oatman Hotel where Clark Gable and Carol Lombard spent their honeymoon; and two, believe it or not, burros. Said burros walk the streets, okay street of Oatman and tourists delight in feeding them carrots. We definitely saw remnants of the burros, minding our step so as not to take home any unwanted souvenirs on our shoes. However we saw no actual burros. They must sleep in on Monday or have some union agreement with the tourist board but no matter, they were nowhere in sight. The proud heritage of the burros has inspired such business names as Jackass Junction, The Classy Ass and Fast Fannie’s; the latter referring to a different kind of western heritage. Our favorite was the Glory Hole. Not sure if Oatman knows that title has a totally different meaning to gay men then we are sure the town intends. Of course that is only an ASSumption; it, like the burros was not available to tourists that morning. 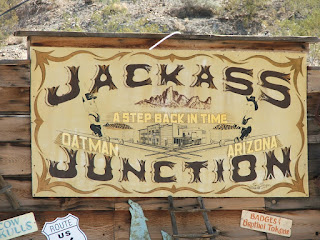 You can tour the Oatman Hotel and even see the room where the famous Hollywood couple stayed. It is no longer a functioning hotel however the restaurant is still open. It has some weird tradition of people hanging dollar bills on the wall; we put ours in the donation box instead. Twice daily, Oatman pulls out all the stops and puts on an authentic, fake gun fight. It’s all very Frontier Village and if you grew up in the Bay Area, you know what we mean.

We head up to Sitgreaves Pass and down a series of switchbacks to Cool Springs. Our research warned of the dangers of driving this road as it has very sharp turns with no guard rails. One site even had a picture of a car that had gone over the side. Well it turned out to be a big fanfare for nothing. Definitely kid’s stuff compared to the hair-raising Mr. Toad’s Wild Ride that is the bus from Aguas Calientes to Machu Picchu. Okay we heard the “thunk” as we just dropped a country name to which we have travelled but we just had to do it. The summit provides a good opportunity for some great snaps of the area. There is also a series of crosses and memorials. From here we finally got to see some burros but these were wild burros, the ones without their Equity Cards.

Cool Springs was an historic Route 66 respite comprised of a gas station and cabins. It had withered away from neglect but was rebuilt for the movie “Universal Soldier” and then supposedly was torn down again; never saw the movie so judging by the title and genre, it was probably blown up. It has recently been rebuilt using old photos as its inspiration. It now has a very cool stone exterior with some classic gas pumps and signs. Inside there is a small room of memorabilia including signed Rolling Stones albums. There is also a gift shop where we bought a bag of ice and a Route 66 – Cool Springs pin for Frank’s manbag, murse or camera bag, whatever you want to call it. 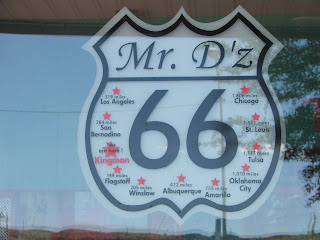 Back to the route and into Kingman. Kingman is a snapshot of another time (especially on Route 66) diners, quaint houses, little parks. We drive down Andy Devine Blvd to Mr. D’z Diner for lunch then check out the train in the park across the street. Of course no trip to Kingman is complete without a stop at the Hilltop Motel, where Timothy McVeigh spent his last week before adding his name to a long line of people most people despise. Obviously the hotel would rather proclaim that it has the “Best View in Kingman”. Apparently that wasn’t enough to dissuade him.

Out of Kingman we can’t resist a stop to see Giganticus Headicus, a Moai-inspired statue. Continuing thru Peach Springs with a stop at the Grand Canyon Caverns and on to Seligman where we are camping at the KOA for the night. The gal running the KOA is a hoot and gives us a keychain reading “I survived the night of 1000 trains”. It seems the KOA is DIRECTLY next to the train tracks. We can tune almost anything out having lived for so long in cities, but there were a lot of trains, really long trains like 100 plus cars each. It was actually kind of soothing after a while. The main area of the grounds had been recently remodeled and was very …elegant. Having worked for Pottery Barn, the fixtures and accessories were very familiar. Something tells us that KOA isn't The Barn’s target customer but it was nice.

Posted by Frank and Thomas

I'm sorry (embarrassed?) to say that I know that Universal Soldier was a Jean Claude VanDamme movie. I sincerely hope the stop was better than the film.

I think they need to make it a law that you can't be called a "ghost town" unless you have actual ghosts as residents! He-he!

Frank and Thomas
The world as seen through the eyes of two gay men, partners in life and travel.